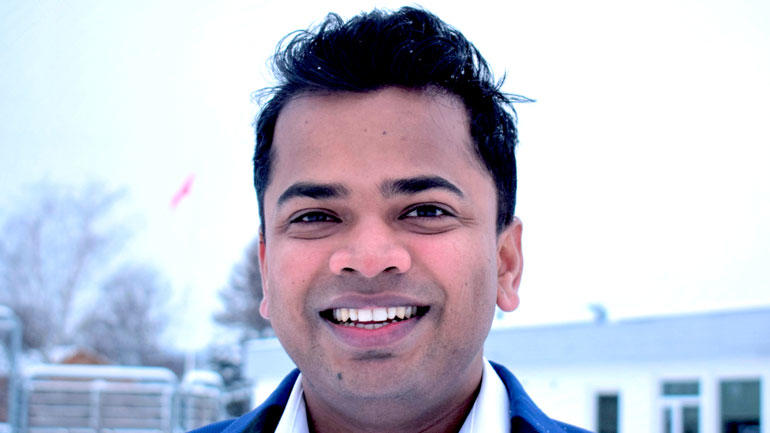 Prasanna Kumara Welahetti Welahettige, in defense of the degree of philosophiae doctor (PhD) at the The University of South-Eastern Norway, Faculty of Technology, Natural Sciences and Maritime Sciences, has submitted the thesis entitled:

Trial lecture will be held in Auditorium A-271 at campus Porsgrunn on September 26 at 10 AM.

The disputation are held at the same place at 13 PM.

Everyone is welcome to attend trial lecture an the disputation.

Oil and gas production from subsea reservoirs is important for Norwegian economy. In the drilling process, a network of boreholes for transporting oil/gas is made from wells to the surface. Drilling of boreholes is challenging: if the pressure at the drill crown is too low, oil/gas from the underground formation will flow uncontrolled into the borehole («kick») and may produce a blow-out of oil/gas into the ocean, as in the Bravo accident in the North Sea in 1977, or as in the Deepwater Horizon accident in the Gulf of Mexico in 2010. If the pressure at the drill crown is too high, drill mud is pressed into the formation, and may reduce future oil/gas production («loss»). In the drilling process, drill fluid is pumped down the borehole to cool the drill crown (drill bit), to remove rock chips and transport these back to the surface, and to produce a suitable pressure at the drill crown.

Uncertainties about kick and loss cause production stop and non-productive time (NPT), and is a main cause of delay in production start. Reducing this NPT by reduced kick/loss uncertainty is therefore of key importance both wrt. economy and safety. The Research Council of Norway together with Equinor supports the «Semi-kidd» project at the University of South-Eastern Norway, which aims at improved kick/loss detection in oil drilling. The key idea is to observe differences in amount of drill fluid pumped into the reservoir vs returned drill fluid (indicating kick or loss), combined with observations of pressure at the drill bit. One hypothesis in Semi-kidd is that returned drill fluid can be measured via a venturi meter in the return loop.

In the thesis «Transient drilling fluid flow in Venturi channels: comparing 3D and 1D models to experimental data», a 3D model (CFD) of a venturi rig has been developed and studied using both water and more realistic drill fluids, with validation using a venturi lab rig at USN. The 3D model has been extended to analyze the transport of rock chips in drill mud. The 3D model is very detailed and accurate, but takes days to solve. For on-line estimation of drill mud flow rate through the venturi rig, a faster model is needed. The research work documented in this thesis has developed new 1D simplified models for both Newtonian and non-Newtonian fluids, and compared these to both the 3D model and laboratory experiments. New developments include 1D flow in a trapezoidal channel, flow with non-Newtonian fluids such as drill fluids, and flow in a moving venturi rig.