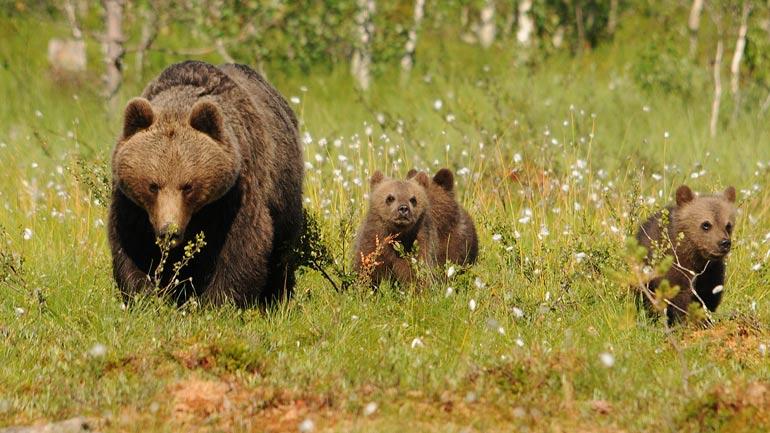 Female bears use a remarkable method to protect their young. 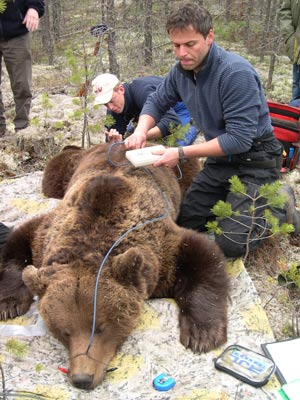 Male Brown bears have a problem: bear cubs remain with their mothers until they are one to two years old and during this period females do not come into heat.  The savage solution taken by many mating ready male bears during mating season is to kill the cubs, so that their mothers cease to produce milk and become fertile again.

This behaviour is known as sexually selected infanticide (SSI) and is widespread in nature. Each year up to 40% of bear cubs in Scandinavia disappear as a result of this.

A new study has shown that many females protect their young by raising them in close proximity to humans.

– Adult bears will normally not approach humans, as we are their main enemy in nature. Nevertheless, it has been shown that many females overcome this fear and consciously reside in areas close to human settlements during mating season, says Associate Professor Andreas Zedrosser of the research group LEBE at USN.

30 mother bears with cubs were tracked using GPS by Zedrosser and other researchers from the Scandinavian Brown Bear Research Project. The study was carried out in Swedish forests during the mating season from 2005 to 2012.

The results were striking:

The 19 females who successfully raised their offspring until they were independent stayed considerably closer to humans than the 11 that were unsuccessful (lost their cubs).

The findings have been published in the research article, Human shields mediate sexual conflict in a top predator, published in June 2016 in the Proceedings of the Royal Society B, and cited in a variety of media both national and international, including Science and National Geographic.

Zedrosser believes that the results should be taken into account in Bear Management.

– Our research shows that bears can reside relatively close to humans without being the classic «problem bears», that exhibit unnatural behaviour and often have to be removed either due to subsidence of the fear of humans or habituation to finding food in our rubbish, says Zedrosser.

Bears that drew close to human settlements left these areas towards the end of July, as soon as mating season was over. GPS surveillance revealed that they did not exhibit a tendency to return to human districts- their later patterns of movement not being different from other bears.

– We must learn to evaluate why bears approach people and consider biological reasons when we make decisions about whether their behaviour is natural or not, says Zedrosser.

Zedrosser refers to the phenomena of SSI (the killing of cubs by non-parental male bears in order to get the female in heat) and how it is impacted by bear hunting. If a large male is shot, scientists have shown an increase in SSI.

– Bears live in a type of hierarchy, where the biggest and oldest male produces the most young. If such a bear is shot then new male bears come into the territory with the intention of spreading their genes, and this puts cubs at risk. An awareness of this dimension of population development must exist, explains Zedrosser.

The SSI phenomena is a core research area for USNs Bear researchers, and a Ph.D. thesis on the dynamics of bear populations in connection with removal of such dominant males is under preparation by Ph.D. candidate Shane C. Frank.