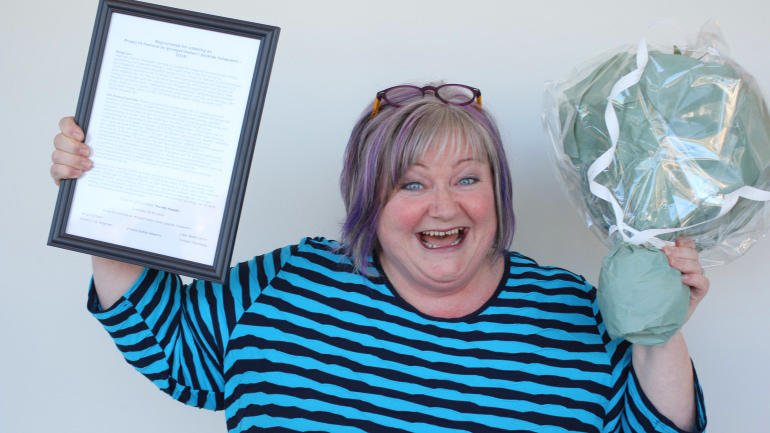 Twenty-five years ago, she was incarcerated, coerced into taking psychoactive drugs and separated from her newborn daughter for five months. Since then, she has fought for human rights in mental health care.

Today, at the "Leap Year Seminar" at the University of Southeast Norway, the annual Prize for Promoting Freedom of Speech in Mental Health Care was awarded to Merete Nesset, a former psychiatric patient, now writer, film maker and public speaker.

The event is an open forum for presenting knowledge and ideas for better mental health care, and is arranged in collaboration with the Solidarity Association Starfish and the Foundation for Promoting Freedom of Speech in Mental Health Care in Norway.

In various contexts, the prize winner has shared her own experiences of being locked up in psychiatric wards, of isolation, of restraints and of forced medication:

“I remember thinking that this so-called treatment is so cruel and inhuman that I need to make use of it for something, someday. I thought all this suffering must not be in vain. I always felt an obligation to contribute to stopping the horrors of coercion, and I felt a strong need to talk openly about the offenses and human rights violations going on behind closed doors—even though the conversation is unpleasant. It’s not just about having the freedom to express myself, it’s become imperative for me,” Nesset says.

Today she works as a mental health activist, writer and filmmaker, contributes to new public guidelines for prevention of and participates in projects for the patient and user organization WSO - We Shall Overcome, where she is also an active member.

“Coerced patients have no actual protection under the law. Although one may file a complaint about compulsory medication, very few get their claims sustained, despite the fact that the current Norwegian practice of forced medication is both illegal under the mental health act and is also not compliant with human rights,” says Nesset.

“I think the massive use of coerced treatment prevents the development of voluntary and more humane treatment options,” Nesset says.

“Merete Nesset is known for her clear and fearless voice in promoting dialogical, relational, drug-free ways of being with people in psychosis,” says USN professor, Bengt Karlsson, on behalf of the Foundation for the Promotion of Freedom of Speech in Mental Health Care in Norway.

Among other things, the jury's reasoning states: “The prize winner has a lot on her mind, and she demonstrates ability in listening to people holding different points of view from her own. The prize winner is able to meet people with respect. This person has a large network, and in no way operates from a separate or isolated point of view.”

Nesset is praised for her ability to cut through in debates about the mental health field in general and the field of coercion in particular.

“I prefer calling things by their proper name. Forced drugging with neuroleptics (also known as antipsychotics, editor’s note) is among the most integrity-violating interventions the state can expose its citizens to. Forced medication is not treatment—I call it statutory violence,” Nesset says.

She emphasizes that she is not principally against the use of drugs, but she believes it must be a voluntary matter, and that the choice must be based on mental health professionals talking honestly about the benefits versus potential adverse effects of the drugs in question.

“On a group level, only a small proportion of patients with psychosis really benefit from so-called antipsychotic drugs. Individually, only the patient can decide whether or not the drugs are useful. It makes absolutely no sense that a random psychiatrist at a given psych ward has the power to overthrow a patient's previous experience with such drugs, solely based on his own conviction that ’antipsychotics work’. It simply absurd,” Nesset says.

The right to refuse treatment

Merete Nesset is also praised for her efforts in demanding securing the individual right to refuse coerced medical treatment in mental health care:

“In a few years, we will look back at this debate and wonder what in the world we were doing in 2019. Forced medication must be banned, and before we get there, the right to refuse treatment must be secured through legally binding advance directives,” says Nesset.

Patients who have horrible experiences with certain treatment methods should not have to spend all their energy arguing against more of what has harmed in the past in a given future emergency situation. In an advanced directive, one should record not only what one certainly does not want, but also reflect on how one would like to be met and what one thinks will be of help.

“The fact that we are still actually discussing this matter in 2019 is unbelievable. Patients and their loved ones have fought for the right to refuse coerced treatment with psych drugs for fifty years,” says Nesset.