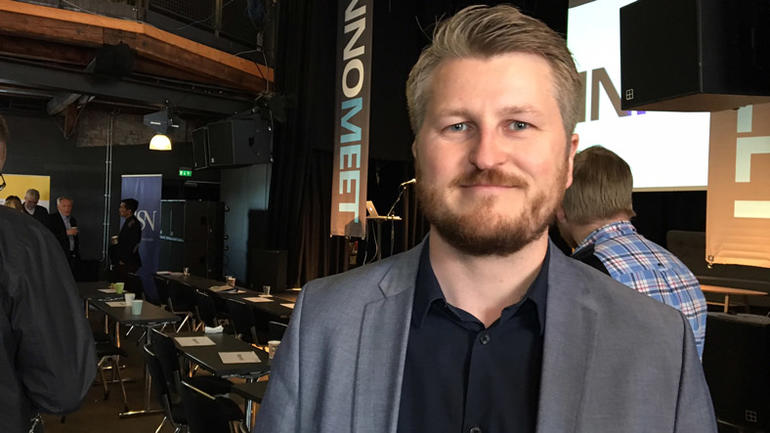 Kim Humborstad graduated in 2009 and is today the founder and leader of the international company Zwipe.

At the age of 32, Kim Humborstad is leading the internationally renowned company, Zwipe.

The company, which is currently valued at 311 million NOK, started as a student business.

Zwipe has developed a wireless and battery free ID card that uses fingerprints instead of pin codes. The business idea arose when Kim was student at the Bachelor of Innovation and Entrepreneurship at the former University College in Telemark back in 2006-2009. He chose student business as his elective on his third year and has ever since developed the business idea, which has resulted in Zwipe – a company that today is valued at 311 million NOK.

"We started working on the idea even before Apple started with fingerprint identification. When you work on something for nine years, the correct timing will come sooner or later” laughs Humborstad.

"I am neither an engineer nor super smart, but soon understood that building a team around me with the right people is crucial. In Zwipe, nobody understands the entire value chain, but everyone understands that they must work together to reach the goal".

Since Zwipe launched in 2014, every day is different for Kim. Today there are 35 employees in Zwipe. In Colorado there are 20 engineers working on development. Some work from Oslo, and some have a home office. There are 12 different nationalities in the company. Recently, he employed a former USN student who has studied the same program as the entrepreneur.

Recently, Kim has spent a lot of time in Asia and has landed agreements with partners in Dubai, Malaysia and Japan. In the latter, the Minister of Trade and Industry Monica Mæland was also present.

“I work a lot with Asia to make this a global project. Then you need to work with different cultures and after 10 years we are now a “hot potato”. The world now wants fingerprint identification”, says Kim.

To succeed globally, you first need local adoption, Kim believes. During his student years in Bø and the time after the business was established, Kim has received good help from his mentors to further develop the project. The first pilot of Zwipe’s identification card was carried out at campus Bø back in 2012/2013. One year later, they ran a pilot with their biometric payment card in cooperation with the business community, the local bank, the university college and the residents in Bø.

"You need local success and make sure you test, because the customers don’t want to take unnecessary risks. Trust is crucial to the end user. In Bø you have an incredibly competent environment, and you depend entirely on the people and the skills they have, said the prime minister when talking about Zwipe in her speech during “Finansnæringens dag” April 4th.

Giving back to the student business community

Kim Humborstad held lectures on the success story Zwipe at the industry and innovation conference Innomeet May 3rd, an event arranged by HSN, Young Entrepreneurship, Innovation Norway and county municipalities in Vestfold, Telemark and Buskerud. The county championship in student business was also at the event.

Kim participated in the county championship back when he was a student. They qualified for the Norwegian Championship in student business "via the backside" and ended up taking the FERD award for best international potential. That resulted in an European Championship ticket where they won the award Grundfors Innovation Award, for Europe's most innovative product and business idea. Recently it’s been important to Kim to give back and he has participated in the county championship in student business both as lecturer and judge.

He has many great tips to give to students who work with entrepreneurship and student businesses.

“Focus on the core of your business idea. Think about potential partners and customers. Networking is crucial. You can’t become number 1 in the world without the right partners”.

How does it feel when a Chinese investor invests 65 million NOK, something you recently experienced? asked conference clerk Kristian Strand from the stage.

“We're celebrating! But that being said, there is also a sense of responsibility. Most startup companies do not succeed, but we will give back. We do not know if Zwipe becomes a financial success or not, but we have been involved in commercializing a technology. Fingerprint cards have become a topic and we help make a difference. As our Chinese partners say, "The future is now".