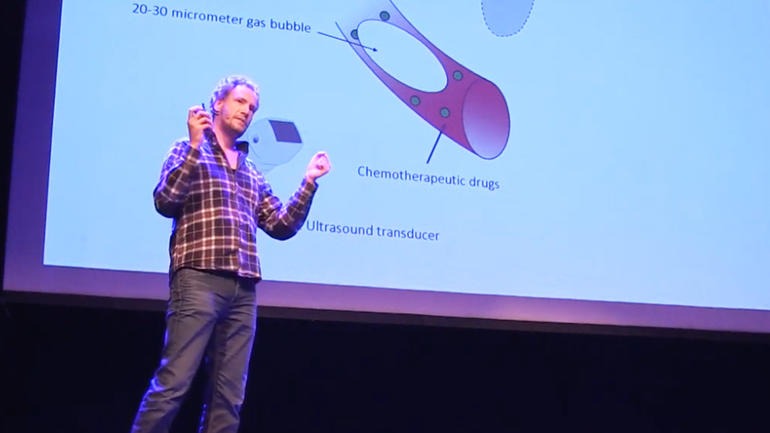 Presented his research: PhD student Kenneth Kirkeng Andersen on stage during "Utforsk 2018" at campus Vestfold, where he talked about his research.

The article has been selected by the editor of one of the best international ultrasound magazines.

A nice pat on the shoulder

It's in the magazine of the "IEEE Ultrasonics, Ferroelectrics and Frequency Control Society" that Andersen's article was selected "Editor's pick" for the month of August 2019.

"It's very exciting and a nice pat on the shoulder. The article becomes much more visible. Hopefully other researchers will be inspired by this way of optimizing transducers", says Kenneth Kirkeng Andersen.

His doctoral project is about developing a new type of transducer (transmitter and receiver of sound), which can operate at two different frequencies simultaneously.

In his doctoral work he has collaborated with the Norwegian company Phoenix Solutions.

Their "Acoustic Cluster Therapy (ACT®)" technology is about injecting microbubbles into the blood with the chemotherapy. These bubbles can then be "activated" by ultrasound in and around the tumor being treated. The result is a more effective treatment of the cancer, and less negative side effects due to the chemotherapy. The challenge is that the technology (ACT) needs ultrasound with two different frequencies to work. Therefore, traditional transducers cannot be used.

"It has been a very rewarding to work on this, especially because it may one day be very beneficial to society. It's nice to think that my work can lead to something positive for cancer patients." 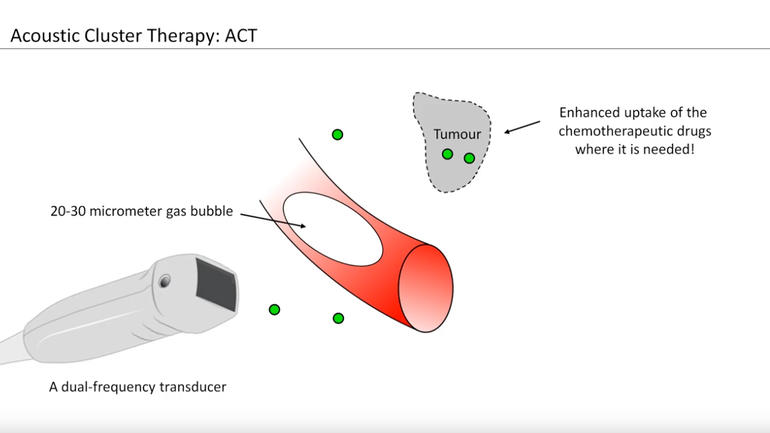 "With these new transducers we have to move away from the established methods for design and optimization. The traditional transducers are not designed for two-frequency sound, so we need new tools. This article discusses one of these tools", says Andersen, at the Department of Microsystems at campus Vestfold.

When he talks about optimization, he likes to use a car as an illustration:

"If you can get an internal combustion engine to use a half liter per mile, instead of one liter, you have optimized the engine. Transducing at two frequencies has gotten "an extra gear."

Method already in use

He is getting close to completing his doctorate and will deliver his dissertation this autumn. Andersen has developed new transducers that are already being used at six research institutions around the world. The technology is currently being tested preclinically on mice, the hope is that it will be used in treating cancer in the future.

"Before publishing the article, we visited a research group in France. They are part of the GE (General Electric) group, which has one of the best professional environments in the world for ultrasound and transducer technology. The researchers had not thought about the solution I came up with, and reached out to me afterwards to say that they had been inspired by my idea on how to optimize transducers. It's exciting that people are inspired by my work", says Andersen.

In this video below from the event "Utforsk 2018", Andersen talks about his research:

Kenneth Kirkeng Andersen is a PhD student in applied micro- and nanosystems.

The article was written together with Associate Professor Martin Frijlink and Professor Lars Hoff at the Department of Microsystems.

His research is affiliated with CIUS - Center for Innovative Ultrasound Solutions at NTNU, where he has been employed as a fellow.

CIUS is a Center for Research-driven Innovation (SFI) under the Research Council, and Andersen was one of the first fellows employed there.