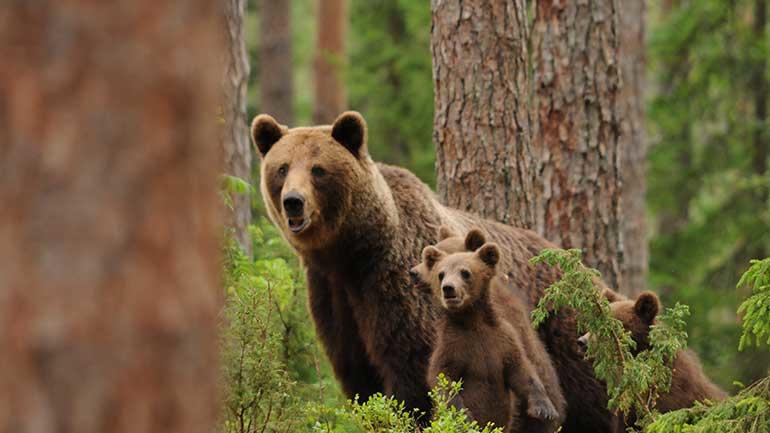 The brown bear and her cubs

In humans, the woman is receptive about every 30 days. Now, picture yourself as a male brown bear during the mating season in the spring, in search for love. Here is your problem: a female brown bear is in the best of all cases only receptive every other year; in some populations even only every third or fourth year. That is certainly a very long wait!

Murder to get to the mother

Here is the reason: as long as the mother is accompanied by her offspring, she will not mate. Because brown bears mature very slowly, the cubs stay with the mother for a minimum of 2 years (in many populations even longer). Once the cubs are sent off by mom to live on their own, mom is ready to mate again the following mating season. But, the male brown bear knows a nasty trick: kill the dependent offspring, and the mother will be ready to mate almost immediately.

Your (i.e., the male brown bear’s) behavior is called sexually selected infanticide. In other words, killing of dependent offspring to gain access to the mother for reproduction. Up to 40% of the cubs disappear every year due to this behavior. But there are some pitfalls a male brown bear has to avoid if applying this strategy: a) thou shalt not kill your own offspring; b) the killing shalt reduce the time until the mother’s next ovulation; and c) thou shalt be the father of the female’s next offspring.

Researchers of the Scandinavian Brown Bear Research Project and the University College of Southeast Norway have investigated this behavior with radio-collared brown bears in the wild. Using field and lab methods similar to the popular “Crime Scene Investigation” shows on TV, the scientists have collected and analyzed genetic and hormonal samples of infanticidal males, the killed offspring, the victimized female, as well as of her next offspring. The results are truly amazing: it was genetically confirmed that a male never killed his own offspring. Male and female bears live solitarily and only meet to mate. The father also does not provide any form of parental care.

Smells their own family?

So how does a male then know that the cubs he just killed are not his? To be honest, we simply don’t know. It may be that males remember who they had mated with two or three years ago (after all, you do remember that, don’t you?). It may also be that offspring related to the male have a kin-smell, in other words, they smell more familiar; this has been shown in mice.

Reproductive success is crucial, also for female brown bears. If a female loses her offspring during the mating season, why should she wait for next years’ mating season? From an evolutionary perspective, it makes sense to lose as little time as possible and mate again as soon as possible. Hormonal and behavioral analyses have shown that female brown bear become receptive within 3-4 days after losing her offspring. But, who to mate with? The male killer, on his side, counts on exactly this behavior of the victimized female, and is smart enough to hang around her for a few days, playing the waiting game. And sure enough, all genetic analyses carried out show that the killer of the first litter was also the father of the next litter. 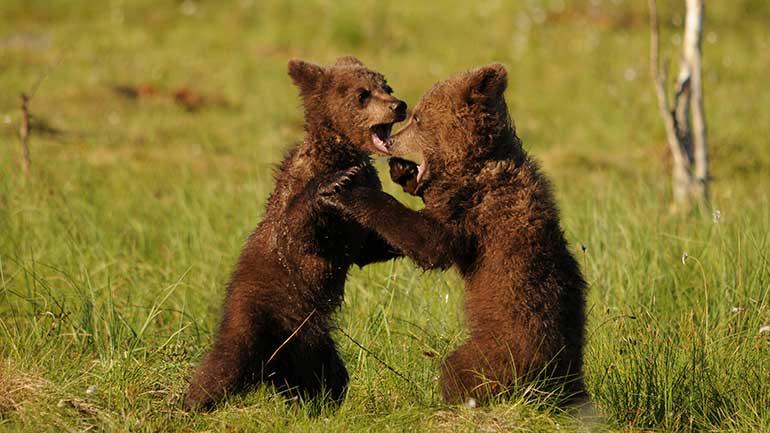 Hides from the male bear

The behavior described above is solely a male reproductive strategy. Do females simply have to accept it? However, evolution is an adaptive process, and females have evolved counterstrategies against infanticidal males. A simple, but very effective strategy for a female with dependent offspring is to avoid areas with males. In Scandinavia, females with cubs are often found in relative proximity to human habituation, because they know that large adult males avoid such areas. Brown bear mothers are also known as fierce defenders of their progeny; they will fight anyone threatening their cubs. However, bear mothers know an even better strategy to avoid infanticide. She knows male commandment no. 1, “thou shalt not kill your own offspring”.

Will mate with almost all adult males

Analyses of radiolocations of female brown bears during the mating season show that a female will mate with almost all adult males in her vicinity. After the birth of her cubs, a male that she has mated with thus has to assume that these cubs could be his, and he will not kill the cubs. There is also an additional advantage for females. Despite the fact that she mates with many males, genetic analyses have shown that the “best” male (in bears this means usually the oldest and largest) is most often the father of the offspring.

How does a female brown bear, mating with several males within a short time period but without access to contraceptive methods, “decide” who should be the father of her next litter? To be honest, we again simply don’t know. In bears, ovulation is induced by the mating act; a female may thus have certain control over when to ovulate. Another possibility may be that the largest and oldest male is able to sequester a female at her peak time of receptivity. There is also evidence of sperm competition in the female reproductive tract. The “best” males’ sperm may “outswim” other males’ sperm.

The love life of brown bears truly can be a soap opera with all the necessary ingredients of sex, intrigues, and murder! However, thou shalt not believe that sexually selected infanticide is restricted to brown bears only! There is evidence from many species, from mice and rats to lions, tigers and bears. And yes, also humans! After all, from an evolutionary point of view, we are just another mammal!

This article is also published on Aftenposten Viten.