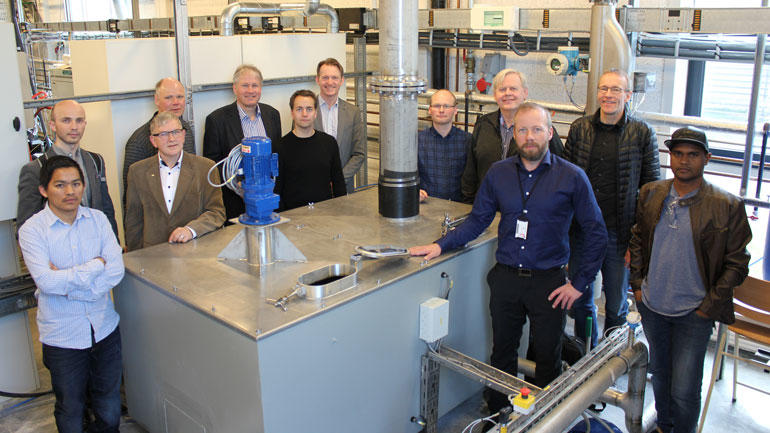 A total of 20 million kroner has been awarded to the project "Semi-kidd". Here are some of the participants in the project.

The University College of Southeast Norway (USN), together with numerous partners, have secured funding to conduct research leading to increased safety and efficiency, as well as prevention of blowouts, during oil drilling operations.

The research project has been funded through the Research Council of Norway’s PETROMAKS 2 program and Statoil Petroleum AS.  A total of 20 million kroner has been awarded to the project.

This project, which in the long term will contribute to more secure drilling operations, is a step in Statoils research on automated drilling. Norway is one of the largest oil and gas exporters in the world and its oil and gas extraction operations are primarily offshore-based. An optimised drilling process in production wells is important for the efficient extraction of oil and gas, and Norwegian researchers are among the foremost in the world in this area.

- This is a large and important project for USN, and it places us on the research front in automated drilling operations, explains the Dean of Technology, Morten Melaaen.

- Statoil are very happy with the breadth of competence contained within the project team and everything is in place paving the way for exciting results, says Senior Engineer, Geir Elseth.

A certain degree of risk is associated with drilling operations, which in the worst case can lead to uncontrolled blowouts. This occurred both at the Bravo-platform in the North Sea in 1977, and at the Deepwater Horizon platform in the Mexican Gulf in 2010.

Methods developed during the «Semi-kidd» project shall aid in the reduction of the risk of blowout, and shall contribute to the reduction of «Dead time», which is estimated to be around 30%, during drilling operations thereby increasing safety and reducing operational cost.

The control of wellbore pressure during drilling is essential. This is achieved by the addition of drilling fluid (mud) to the well. When the pressure in the well is too high it can force mud into the well, which reduces oil and gas production and loss of drilling fluid.  Low pressure, on the other hand, results in leakage of oil/gas out of the well, and can result in uncontrolled blowouts.

In addition to the net amount of drilling fluid added, early problem detection is necessary, as is information about the drilling fluid’s density, viscosity, etc. Today’s measuring instruments are large, heavy and expensive and provide only limited information.

Methods, based on a novel combination of a selection of cost effective sensors with mathematical modelling to provide a robust and precise solution, are at the core of the «Semi-kidd» project. These innovative methods shall be tested out under controlled conditions during the project.

The project leader for «Semi-kidd» is USN’s Professor Bernt Lie.