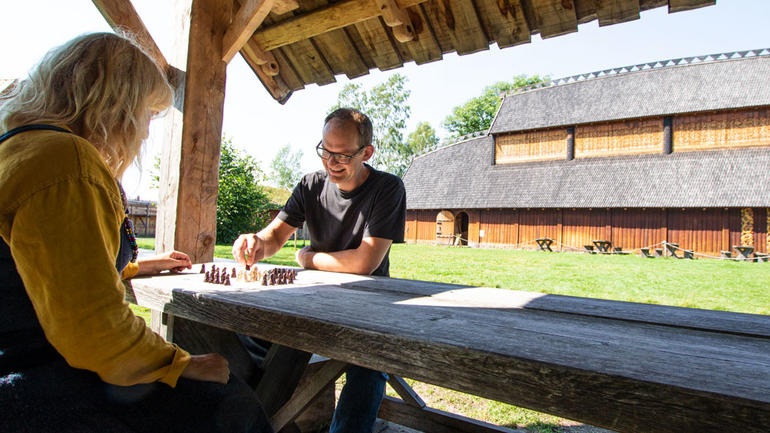 Learn about and try out the vikings' favorite strategy game, hnefatafl, at Midgard vikingsenter. As a part of the event one of Norway's best chess players, Johan-Sebastian Christiansen, will go head to head against former hnefatafl world champion Adam Bartley.

Did you know that the vikings often played board games? Archaeologists and others have found many different game pieces and boards, and the various games also appear in the sagas and other written sources.

These games are often called "tafl games" ("tafl" can be translated to “board” or "table"), and among the most popular is the game hnefatafl (often translated as “the king's table”).

Professor Bjørn Bandlien will give a popular science presentation about why games such as hnefatafl were so widespread and what kind of function they may have had, beyond pure entertainment and time-consuming.

After the match, the audience will get a chance to play themselves, under the guidance of hnefatafl-skilled Vikings affiliated with the Midgard Viking Center.

• 13.30 part 2: World Tafl Federation presents themselves and explain the rules to be used in the match (Copenhagen 11x11).

• 15.00-16.00 (+) part 4: the audience gets the opportunity to play. We put out game boards and pieces and follow the infection control routines from the Chess Association. Resource persons circulate and help new players.

Due to Covid-19, there is a limited number of seats available for this event and everyone who is to participate must sign up using the form below (full name, phone number and e-mail adresse. This information will only be used in the case of the need for infection tracing).