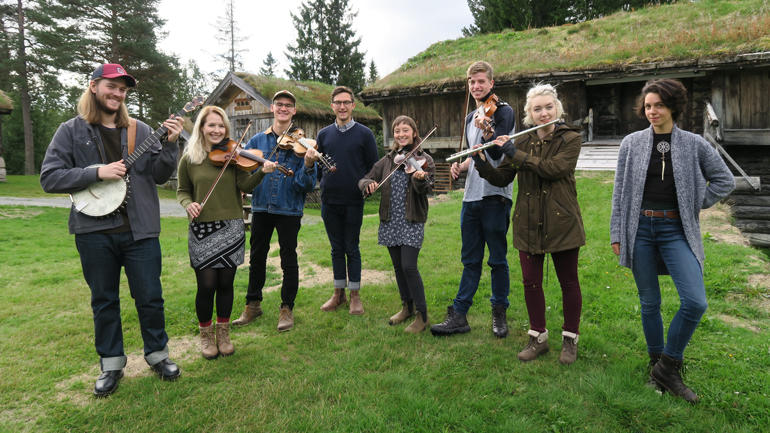 Rauland has the most international students of all the campuses at the University of South-Eastern Norway. Many of them are studying Norwegian folk music.

Bertie Armstrong from England and Sophie Hetherington from Shetland are enthusiastically describing their first few days at campus Rauland. These two are going to study Norwegian Folk Music for a year. There the main sources of music will be brought together in a broad academic perspective. Musicology, cultural history and sociology will contribute to creating an integrated theoretical base for learning.

Both are musicians. Armstrong plays the banjo og Hetherington the fiddle. They have studied at Newcastle University in England. This is their exchange year part of their bachelor degree.

"It's nice to be so close to nature", says Armstrong.

You really are when you study at campus Rauland. The Totak lake is just a stone's throw away from the university and the mountains surrounds the campus on all sides. Still, it's not the nature that draws the 140 students to come to Rauland. It's the traditional arts.

"I grew up with Shetlandic folk music. Many also play Scandinavian folk music in Shetland. I want to learn more about Norwegian traditional music because Shetland and Norway share coastline", says Hetherington.

Armstrong adds that it's nice with a small university where everyone knows everyone. He plays traditional American music on his banjo.

"Now I want to learn Norwegian folk tunes I can play on the banjo. I also would like to learn how to play the Hardanger fiddle", says the Englishman.

Keilan Aplin-Siegel from Canada wants to learn Norwegian folk music and had USN and the town of Rauland recommended by her friends. She plays banjo and fiddle.

"It's nice here. I am getting to know the place", she says.

"International students contribute to the culture at the USN, at the same time Rauland has a unique national identity we want to take care of. Rauland students are different than the average student. They are more driven by interest. They are very passionate in what they do", says rector Petter Aasen.