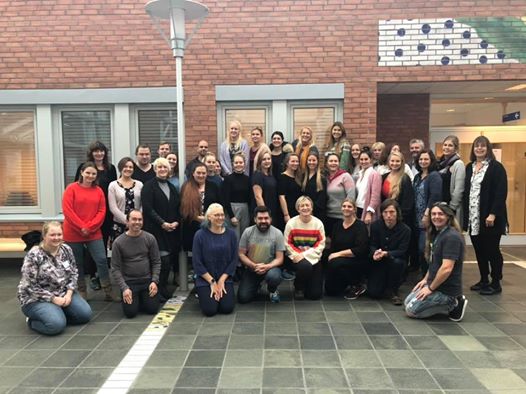 At the core of the project is the idea of involving students as co-researchers. Students are not assistants, but researchers drawing on their strengths to develop the project together with the faculty. The students’ personal experiences with school and education, and for many of them their age and language, will hopefully provide them with a closer connection to the informants than the more scholarly faculty researcher.

We have tried to recruit first-generation students and students that have had or have experience with struggling at school or university. We know that these students will find higher education difficult even though they might be doing well (Spiegler & Bednarek, 2013:318).

In MaCE, students participate in a multi-national, interdisciplinary team as co-researchers. They are actively involved in the research, both as interviewers, respondents, analysts and writers. They are part of a joint researcher-student situated learning environment that draws on the experiences of a range of academics and fellow student-researchers across the three countries. They join as individuals and become active participants in the social practices of a social, multidisciplinary and multinational community. In this way, the students can actively construct their academic identity through this environment (Lave & Wenger 1991; Wenger 1998; Wenger et. al. 2002), and obtain academic merits, which can increase their confidence in an academic environment.
The students and their work are valuable assets for the research project, but more importantly, what is in it for them? The students are all part of a Master- or Bachelor program. They have their tutors and their programmes of study. Being part of the research project means that they will be given the training in the methodology used in the project, as well as other knowledge and experience necessary for the research process. The students work alongside the researchers in different parts of the process, are hands on, and observe and participate in discussions which will provide them with experience and insight in doing research. This training is in addition to the support the students receive from their university programme. Through this experience, we hope the students will be better equipped to master their thesis, as well as feel more comfortable continuing their education. We hope the students will experience and continuously develop a shared identity in cooperation with the other project participants through engaging in and contributing to this community’s practices.

Challenges
Even though both lecturers and students were informed about the time and place for the face-to-face seminar during the fall semester, there were still some obstacles. There are many involved in the teacher education programme, and even though the person responsible for the course received information, it did not necessary get through to others. Therefore, one student had an exam in the middle of the seminar. Other students had lectures they were expected to attend but had to skip in order to attend the project. Perhaps there will always be logistical challenges like these in a large institution. Nevertheless, we did manage to sort it out and somehow “satisfy both parties”. Most of the tutors are part of the MaCE project. However, five master students have tutors that are outside MaCE. We see that it can be a challenge to update the tutors and that it is much easier for the tutors to follow up the students when they are part of the research as well. In the future, we will have to ensure that we have enough tutors at hand who are involved in the project or work in close relation to members of the project group, to ease the flow of information. Another challenge experienced in Norway is the vast geographical area served by USN. Several of the co-researchers live scattered and in rural areas which hinders frequent trips to the campus for project meetings. This challenge is overcome by skype-meetings and e-mails. That said, our overall experience is that all project members benefit from face-to-face meetings.

We recruited students from various programmes within the sphere of education and social work. Recruiting has been different in each country, the common denominator being that several students were invited to join the project. Thereafter, the students responded and expressed their interest. We have not looked at grades nor other factors, just their voluntary interest in being part of a research community. All students have known from the beginning that although the project is a possibility to receive additional support, joining would also demand students to use additional time for an online course, two seminars as well as national coursing.

Recuiting experiences from the UK, Norway and Denmark

The students who joined the MaCE project have been given excessive guidance. As mentioned, guidance and follow-up activities demand an extra effort on the students’ behalf. First and foremost, the students have been receiving guidance through the shared experiences of formal and informal teaching, discussion and by spending time together. In addition to the official program at the international method seminar held in Norway, the researchers and co-researchers had the opportunity to share experiences and ideas during tea breaks and over lunch. During the afternoons and evenings, some social activities such as dinners and a bonfire was arranged for all the project members. During these more relaxed settings, we found that conversations flowed even more freely between project members and across national boundaries, professions and seniority.

An example from Norway
The Norwegian co-researchers got access to informants through the project’s stakeholders and network. Faculty arranged fieldtrips and interviews and joined students on fieldtrips for support and to help inform potential informants about our research. Faculty has conducted interviews side-by-side the co-researchers, underlining the project’s principal of co-working. These outings strengthen the formal and informal bond between project members.
Halfway through the data collecting phase, the students were invited to meet faculty for a transcribing workshop. A template for transcribing was presented to the students followed by a group discussion. Since the transcripts were available to all members of the project, we stressed the importance of anonymizing the interviews. A substantial amount of time was set aside to start the transcribing. During this session there was also time to answer questions, share experiences from interviewing and to debrief. After the data collecting phase, we invited all co-researchers to a coding seminar.