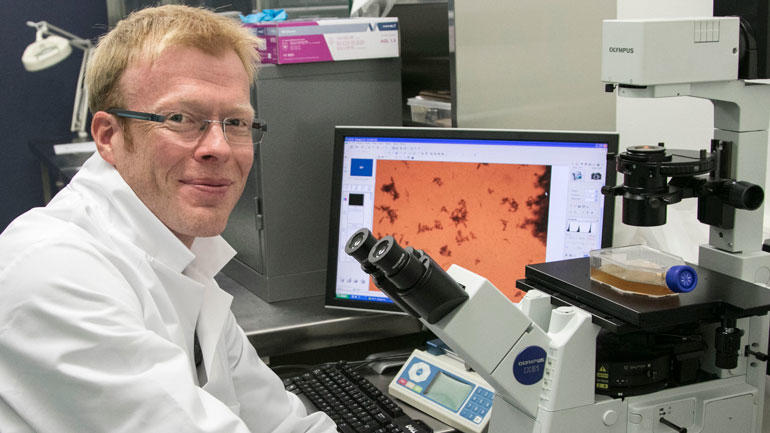 Professor Erik Andrew Johannessen has been project lead in the Pac-Man project.

A novel project has emerged from the research environment at the Department of Micro- and Nanosystem Technology (IMST): The legendary labyrinth from the 80s computer game Pac-Man has been recreated in microscale, with a diameter of under a millimeter, and filled with microscopic prey and predators swimming around in a nutrient rich fluid.

The single celled flagellate, Euglena, and Ciliates can be viewed as «Pac-Men», being hunted by multicelluar rotifer «Ghosts».

Using micro scenography the films creator, Adam Bartley, used neon lighting to recreate the staging familiar from Pac-Man and capture it on film.

– It’s clear: we have had fun carrying out this project, and the purpose has been partially to raise awareness and draw attention to the research field. However, the main purpose was to demonstrate how micro and nano systems technology can create a three dimensional environment, which can trigger more natural behavior in single and multicellular organisms when studying them under the microscope, explains project lead at USN Professor Erik Andrew Johannessen.

He explains that traditionally scientists and the pharmaceutical industry have grown cells and microscopic organisms in an artificial two-dimensional environment in Petri dishes. There, these little creatures swim freely around in an environment completely devoid of structures.

– In nature these organisms are found, for example, in peat and moss, where they must navigate an elaborate system of canals and structures. By introducing a three dimensional labyrinth into a Petri dish, we force them to interact with their surroundings and therefore induce a more natural behaviour, that presumably results in more realistic and valuable data, explains Johannessen.

A bridge for communication

Filmmaker Bartley has previously worked together with Johannessen in an endeavour to create a broad engagement for science.

– Advanced technological research is generally too removed from people’s everyday lives. Therefore, it is extremely important to communicate the practical application to the general public. Bartley explains that in this case art and entertainment, in the form of film, aims to create such a bridge for communication.

Although the simplest lifeforms appear to move around randomly, researchers discovered an eye-catching behaviour in the multicellular rotifers:

– When the rotifers were first introduced into the labyrinth, they were very cautious and proceeded slowly. However, after a lag of about a day, this changed and they dashed forward in a more focused way. Johannessen suggests that this may be due to chemical traces they leave behind, making it easier for them to find their way forward.

Digital tracing of paths taken by the different species, in order to elucidate if there is logic in the way that they manoeuvre, will be one focus in a continuation of the project.

– By creating a more complex habitat, in the form of a labyrinth, it makes it possible to establish zones that may be favourable for the organisms one is studying. Johannessen comments that behavioural changes on repeated exposure to the same environmental conditions could be revealed using digital tracing

This project was supported by VRI Vestfold (Programme for Regional R&D and Innovation financed by the Norwegian Research Council), Verdiskaping Vestfold and internal funding from the University College.