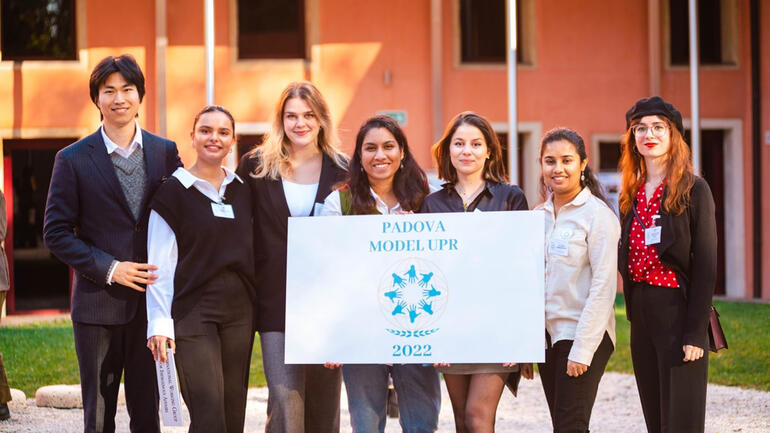 USN students participated in the unique and challenging Padova Model UPR 2022 and performed with excellence.

By: Piyumani Ranasinghe, MsC in Human Rights and Multiculturalism (USN)

Every five years, the human rights records of all member countries of the United Nations (UN) are reviewed at the Universal Periodic Review (UPR) at the Human Rights Council (UNHRC). It is a special platform that enables states to review their progress regarding their human rights commitments and address human rights violations. It is also a meeting point for state delegations to engage with activists and human rights professionals working on human rights issues in various parts of the world.

The Padova Model UPR is an academic simulation of this unique human rights review mechanism, and it takes place annually at the University of Padova, Italy. This year, the 5th edition of the Model UPR took place from the 22nd to the 25th of November, with the participation of 52 international students from seven Universities across Europe.

At the Model UPR, all participants must first go through a competitive and extensive application process to be selected. Since all participants are required to simulate the real stakeholders at the UPR, once they are selected everyone is assigned different roles ranging from States, International Non-governmental Organizations (NGOs), to National Human Rights Institutions (NHRIs).

By playing different roles as states, INGOs, and NHRIs, participants not only gain a deeper understanding of the entire UPR process but also receive an opportunity to understand the political nuances and practical dynamics within the human rights governance systems. Simulating the UPR process, participants have to advocate for various human rights issues and engage in interactive debates, presentations, lobbying sessions, and the final adoption of the human rights reports for each selected state.

This year, six first-year students from USN's master's degree program in Human Rights and Multiculturalism took part in the Model UPR and also won two prizes as the best INGO delegations in the UPR cycle. 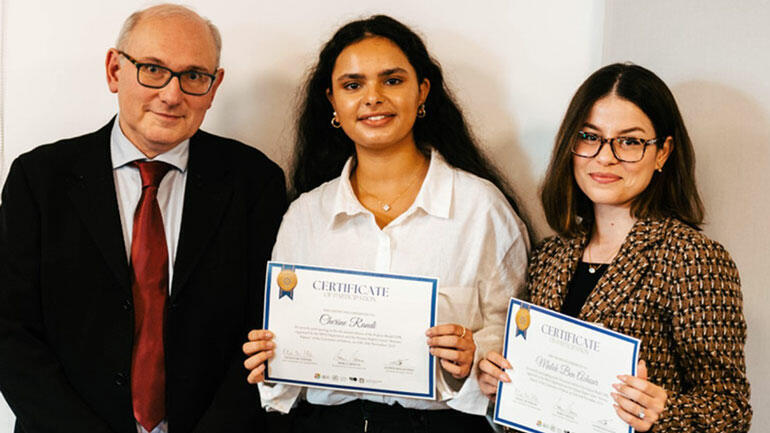 “The Model UPR 2022 was such as insightful learning experience. We tried to be as authentic and professional in our representation of the IWGIA. It was a worthwhile opportunity to gain experience in international diplomacy and negotiation, but we still have a lot to learn”, says Malek.

Marianthi Antoniou and Patrick Smith, who represented the Global Initiative to End All Corporal Punishment of Children (GIECPC) won the joint award for the "Best Performing Team according to the Participants". 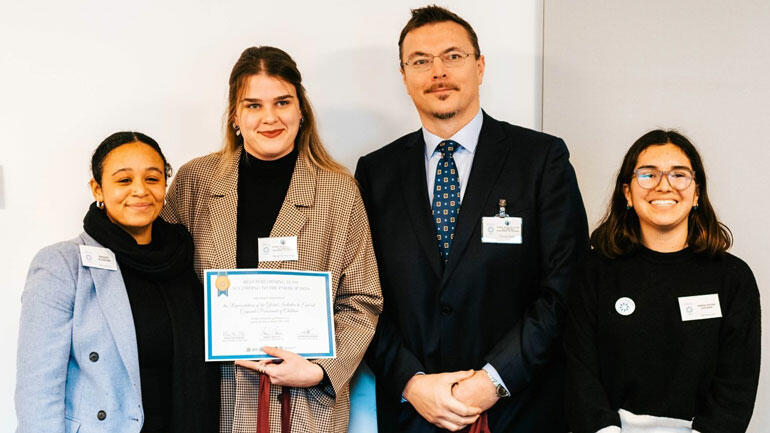 “Padova Model UPR has been a unique and challenging experience for me. During the application process, I realized my true passion for Child Rights. I identified with my role as the Executive Director of GIECPC and felt proud for fighting for the rights of abused children. I expected to learn more about advocacy, interact effectively through lobbying with the States, and get to know UPR's function better”, adds Marianthi.

The winners were selected by the UPR Secretariat which also consisted of experts such as Prof. Paolo de Stefani (the Head Organizer, from Padova University’s Department of Political Science, Law and International Studies,); Mr. Marco Mascia (the Director of Padova’s University’s Human Rights Center) and; Mr.Gianni Magazzeni (the Chief of the UPR Branch, at the UN OHCHR).

USN students, Emily Jayne Benson-Kallman and Runze Wang, also participated in this year’s Model UPR representing the delegation for the National Human Rights Institution in France. Amidst the hard work of the UPR process, Runze voluntarily took the time to contribute his professional skills as a photographer to visually document the experiences of the Model UPR 2022, which was commendable.

USN Students also in the Secretariat

My colleague Kalpani Dambagolla and I have been engaged in organizing the 5th edition of the Model UPR since March 2022. We were delegates in the previous Model UPR cycle in 2021 and received the opportunity to represent USN at this year’s Secretariat. 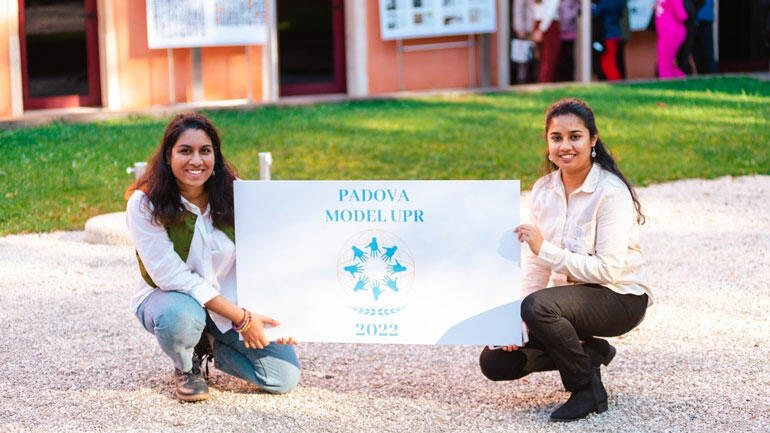 We worked with an international team of students and former delegates of the UPR. Noteworthily, the event is organized with the support of the Human Rights Centre of the University of Padova and is also endorsed by the UPR Branch of the Office of the High Commissioner for Human Rights (OHCHR) of the UN and the NGO UPR Info.

“Whether one is a participant or part of the organizing team, this makes the Model UPR a great avenue to discover future career opportunities. We are second-year Master’s students from the Human Rights and Multiculturalism program and this was an opportunity to network with experts in the field”, adds Kalpani.

As organizers, our work has ranged from conducting information sessions at the application stage to all other conceptual and logistical tasks entailed in an event of this calibre.

In September, we conducted an information session at Campus Drammen for the Master’s students of the Human Rights and Multiculturalism degree to apply for the Model UPR 2022. To witness participants flourish from human rights students to real delegations and activists during the UPR process is undoubtedly motivating for any aspiring human rights professional. It is worth mentioning that the support and encouragement of the Faculty members from the human rights and multiculturalism degree program were crucial for us to participate in the event.

The comprehensive training that all participants receive at the Model UPR also includes sessions from experts in the field, an added advantage for professional development.

Recalling her experience at the Padova Model UPR, Cherine says it was “a distinctive opportunity to learn about human rights, democracy, and diplomacy interactively and engagingly”.

“Among other things, we received help and support throughout the entire event, including in our work with submitting reports, lobbying, international relations, and other diplomatic tasks”, adds Cherine, who advises USN students to sign up for next year's competition.

“As for next year’s applicants, I highly recommend making the time and applying for the Model UPR. Overcoming fears, challenging yourself, and exposing your ideas in a public setting, along with networking, have high educational value when studying at a Master's level”, says Marianthi.