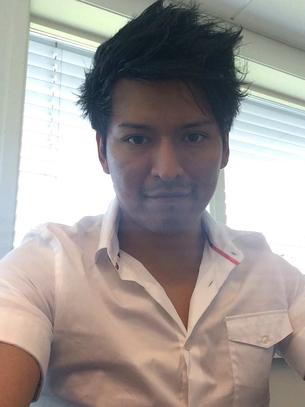 The aim of  this work is to provide a simple and compact electronic Front-End to actuate and read-out resonating sensors/transducers by using the Ring Down Method (RDM). Typically, this purpose is achieved by means of two different electronic circuits, one to activate the transducer, and the other one to read it out. On the other hand, the proposed Front-End provides a single system to perform both tasks. This is accomplished by taking advantage of the same number of components to implement a bidirectional device, which is in fact an amplifier. Therefore, compactness is the main characteristic of this electronic circuit, which provides many interesting advantages such as small area occupation, design simplicity, and the possibility to realize a low power system. All of these characteristics makes this circuit a good candidate to realize the analogue Front-End of a modern and portable electronic device sensor based. The applications of this device are numerous, such as Pulse-Echo Ultrasound systems (ex: fish finders, ultrasound imaging), Biomedical systems (ex. Pregnancy ultrasound scans), military systems (ex. radar), …

The flexibility of this sensor Front-End has been improved by adding 2 other features to the basic structure: a control system to lower the power consumption and a tuneable bandwidth to filter out unwanted signals like high frequency noises.

The proposed electronic system has been prototyped and tested with piezoelectric transducers. In particular, it has been fabricated by using commercial electronic components and mounted on a printed circuit board (PCB). Measurement results reveal a system bandwidth up to a few MHZ and a static power consumption of 270μW with a power supply of 5V. However, these values could drastically improve if the electronic circuit is designed and fabricated in ASIC. These characteristics have been compared with the state of the art, showing that the proposed sensor interface presents competitive performance in respect to the other structures described in literature.

Finally, a detailed analysis and modelling of the presented electronic Front-End has been developed, with particular attention in describing the effects of the leakage currents on the working principle of this electronic circuit.