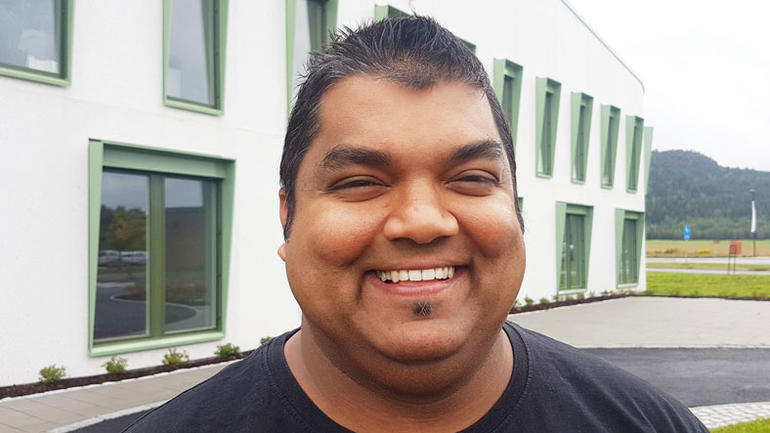 Chameera K. Jayarathna is a final year PhD student who will be defending his thesis on the 15th of September. His PhD thesis has the title ‘’Development of a fluidized bed particle classifier for application in calcium looping with indirect heat transfer – Experiments and simulations’’.

The work is related to the design of a calcium looping based CO2 capture process meant to be applied in coal fired power plants with the aim to reduce emissions of the greenhouse gas CO2. The PhD work was part of a bigger research project funded by GE and Gassnova.

In conventional calcium looping technology, the required calcination heat is provided by a separate oxyfuel combustor, which needs an air separation unit (ASU) to provide the required oxygen for the process. However, the ASU demands a considerable amount of power, which gives an energy penalty of typically 5 % to the power plant. However, in the system considered by Jayarathna, the required heat for the calcination is instead supplied indirectly from the main combustor in the power plant, so there is a no need for an ASU in the system. This reduces the energy penalty to values in the order of 1-2 %. The indirect heat transfer is done by using inert particles that are heated up in the combustor and then transferred to the calciner where the sorbent material is heated up after mixing with the hotter, inert particles. Hence, the sorbent material is calcined. After the calcination is done, the mixture has to be separated. Jayarathna’s work has mainly focused on designing, constructing and doing experiments in a novel solid calcification system to separate the sorbent particles and the inert particles. The results of the work are very promising as the classifier is able to give a high degree of purity of the particle streams leaving the classifier. This result is crucial in bringing the CO2 capture technology further ahead.