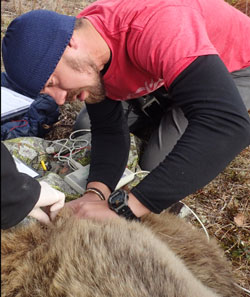 Understanding the effects of harvest is important for sustainable wildlife management and conservation.

And yet, the focus of managers has predominantly been on the direct mortality of harvest, often ignoring the indirect effects of harvest, such as those resulting from changes to sex, age, and social structure, the behavior of individuals, and the potential for human-induced selection.

Such effects can influence population growth rate beyond that expected from direct mortality.

This thesis reviewed the indirect effects of harvest on the Swedish brown bear population, explored the spatial  reorganization of bears following harvest, examined whether the spatial reorganization of males can contribute to sexually-selected infanticide (SSI), and evaluated whether hunting has played a role in affecting fine-scale genetic structure of matrilines.

The best documented indirect effect of bear harvest in Sweden is SSI. The disruption to social structures due to harvest causes a spatial reorganization in brown bears, seemingly as a result of competitive release from conspecifics. This is most pronounced among surviving individuals living in proximity of hunter-killed bears of the same-sex. These survivors consistently increased their use of the now vacant home ranges.

Furthermore, the strength of spatial responses of surviving individuals during reorganization was modulated by the sex, pairwise relatedness, and age of surviving and killed bears, in addition to hunting intensity and population density.

Female brown bears are socially and spatially organized in matrilines. It is unknown how alterations to FGS could affect the persistence of populations. In the case of the Scandinavian brown bear population, changes to FGS could be an indication of selective harvest, the redistribution of male reproductive success, altered dispersal patterns, and increased individual turnover associated with high hunting pressure.

However, we provide empirical evidence that indirect effects of harvest exist, particularly through a spatial reorganization following harvest that can influence the risk of SSI. We suggest that managers of bear and other large carnivore populations apply the precautionary approach and assume that indirect effects do exist, which could have a potential impact on population structure and growth.