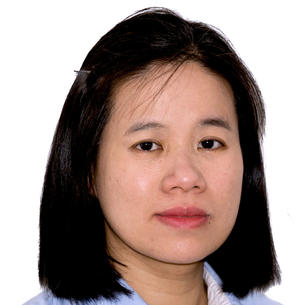 Throughout the world, approximately 1 million patients undergo cardiac surgery every year, making it a well-established and common procedure in hospitals. The procedure is regarded safe, but complications may occur, and reliable methods to assess ventricular function during and after cardiac surgery are essential to ensure the best possible prognosis for the patient. The target of this project was to develop small and dedicated systems to continuously monitor cardiac function during surgery, and in the future, also during the first days following the operation. The system used two miniature ultrasound transducers attached directly to the heart surface during surgery.

In her PhD, Thu Thuy Nguyen developed new software algorithms to calculate the motion of the heart muscle, using data from the ultrasound transducers. Radiofrequency scanlines from the transducers were recorded and used to calculate velocity and strain inside the heart muscle, and to track the motion of the layers inside the heart. The starting point was two standard velocity estimation methods, time delay estimation and phase shift Doppler, and these standard methods were modified to adapt them to the measurement situation. Nguyen developed a computer simulation model for the heart to test her methods on a model where the true motion is known, and she tested her methods on ultrasound data acquired from animal trials.

The results showed that the tested estimators could give robust data in most situations, but there were variations in quality and processing time. Two phenomena in cardiac mechanics were investigated as examples of clinical information that can be obtained from this system: Transmural strain profiles as function of myocardial depth at different sites in the left ventricle, and effect of myocardial perfusion on the end-systolic radial strain.

The main result of Nguyen’s research is the development of an ultrasound measurement system with signal processing methods to monitor myocardial motion in detail, in particular regional myocardial deformation. Several velocity estimation methods were tested and compared. The choice of which one to use in a specific application will be a trade-off between accuracy, robustness, required computational power, and computation time, the latter being particularly important when real-time processing is required.